Well its been a long time since I've tried blogging but here I go again. (out on my own. going down the only road I've ever known. Like a drifter... you get the picture. I like 80s hair band metal. Sue Me.)

I just got back from codemash. This is my first year back in awhile. I attended the first three codemash events and they were life altering for me. They set my software development career on a journey that I'm still on. I truly believe that those events help push me to be more passionate about software and not just treating it as a job. Well fast-forward 8 years since the first codemash and I needed some career rejuvenation. I feel like my software skills have been stagnant for the past few years. In my defense, we did  have Castañeda 2.0 arrive recently so there's that. But beyond that I've been lacking the same passion and desire that I attacked the world with those 8+ years ago.

What I noticed this year is that codemash felt more like a "real" conference than before. Don't get me wrong, it was still a really amazing conference with great people and great content... it was just lacking that grass roots passion. I guess that is ok right? I mean that is what we want for the things we love right? We want them to be successful. Its just that feeling that you get when "your" favorite underground band goes viral and now the same kids that listen to Katy Perry or whatever the hell useless song is popular today are also listening to "your" band. Funny tangent: I love Red Fang. My daughter loves Red Fang. Most people don't even know who they are. They were just on Letterman a few days ago. I hope they break wide open. I really do. I'm just dreading the day they release their "black album," head into counselling and produce crap like entersandman 2.0. For now. Go Red Fang! Get all popular and stuff!

The first codemash felt like I was part of the beginning of something. Something bigger than me but just by my mere presence in attending I was helping build it. I miss that feeling and I think that is what I was looking for in codemash 2014. I didn't get that. That was impossible to recreate. That is like me going to Lalapalooza this year and expecting the same feeling I got out of that first when when Jane's Addiction headlined. Just impossible to recreate.

Like I said, it was still a really good conference and one of the sessions I attended was "Becoming an Outlier: Career Reboot for the Developer Mind" by Cory House. While I think the majority of the content was either common sense or a little over the top it was great to hear. While I don't know Cory personally, I know him. He was me 8-9 years ago. I listened to a podcast a day while I did something else. I tried to maximize every minute of my time in learning more about... something. It was great to hear Cory talk about it. It rekindled a little bit in me to do more. Will it last? Will it work? Who knows. All I know is that the theme of "Produce more content than you consume" was present in his talk. A lot of my friends and other streams of input have also had this theme. In an effort to do that, I'm trying to reboot my blogging and here is my first of the year. There my first content creation done. Here's to another hundred or so more!

Brian Prince ended the conference asking us to do one new thing this Monday. I don't know if this counts as "new" but at least its something. Here you go Brian. I hope your happy.

I also won my first thing ever at Codemash. Zombie Blaster! 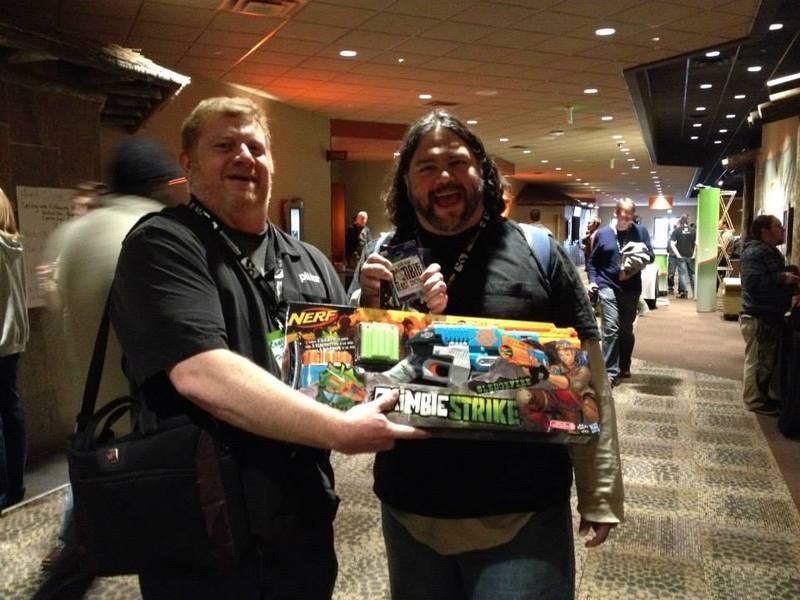